So time has flew and the Google Summer of Code 2014 has come to an end. Since i had already completed the planned coding work, this week i mostly spent on writing the unit tests and adding the documentation for the module. Therefore i completed that work this week. In the next few days i will be releasing the final 1.1.0 version of the module and will deploy the artifacts and hence can finish the GSoC period with a success note.

Since this is my last blog post in the i would like to thank my awesome mentors Pascal and Jan for all the guide they gave me during this time. When i started i had a little programming knowledge on OpenMRS but they helped me a lot in catching up the speed. Also i should thank Micheal,Daniel,Wyclif and Harsha too for all the help they gave me in answering queries for me to know well on the project.

My mentor Pascal is on vacation this week so we didn't get time to call this week. He had given me all the guides before the vacation and i was able to finish the tasks as per his advice. In the next week i will be updating OpenMRS developers list with the final state of the project. Looking forward to the final evaluation.

Posted by Unknown at 9:08 PM No comments:

In addition to that i completed a short video of the final state of the module so far, added a demo on how to add the module, invoke the indicators and observe the displayed data graphs there. By the time of creating the video, the 'Created encounters' indicator was in progress therefore the demo doesn't include the graph for that. However i will be updating it on the module documentation.

The post on the final presentation posted into OpenMRS talk can be found in the below link.

Therefore the next week i hope to spend on writing the test cases as well as complete all the testing on the module source code. After that the final week can be spent on adding the documentation and releasing the version 1.1.0 of the module to conclude this great summer !!

Posted by Unknown at 3:57 PM No comments:

Time has flew so fast and it is one more coding week in the GSoC. This week i finished the logged in users indicator with completing both graphs for the Logged In Users Count as ell as created listeners, deletion thread for the indicator.

In order to enable user log in tracking when the module is started, it is needed to invoke the 'Enable User Login Tracking' button from the module home page as below.

After that when you go to User Logins: section the below is the view of the charts for logged in users per each 30 second and for each 5 minutes. 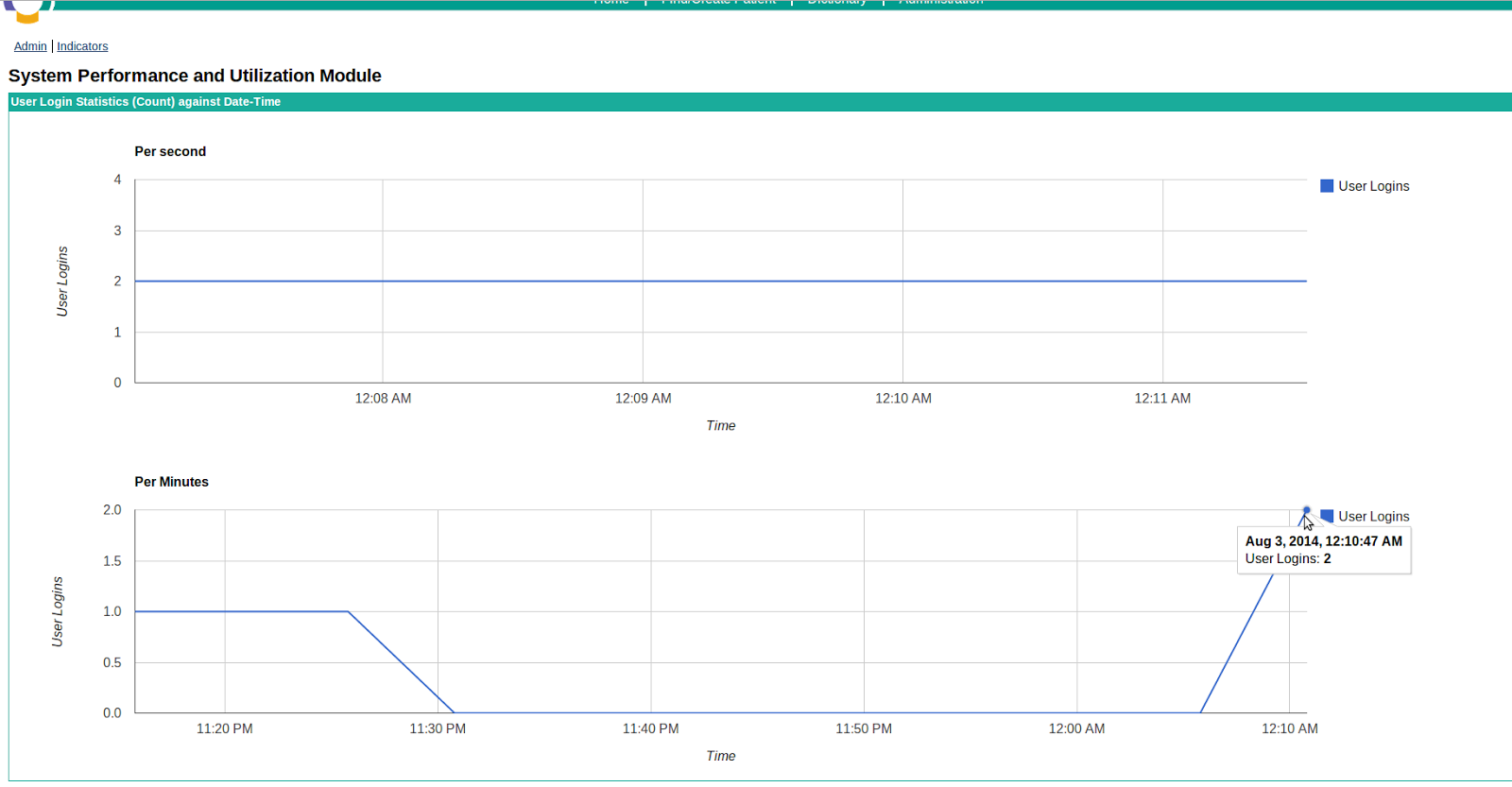 Since the coming week is the final coding week for GSoC as agreed with my mentor Pascal, i will be working on getting one more application indicator done, which is 'completed forms per hour/day'.

In addition this week i also spent time on working on my final evaluation video for the project which will be added into OpenMRS talk page in the coming days after i finalize it with my mentor.

Posted by Unknown at 6:03 PM No comments:


Since my previous attemp of getting logging in users through a SessionListener failed, this week i started back with two alternatives.

1. As suggested by my mentor Pascal, i tried to use a scheduler task for this. But since the task also doesn't have HTTPSession infomation this was not successful.

2. Created a new UI button to enable user login data tracking. When it is tirggerred the HTTPSession of the servlet request is passed to the Collector thread and logged in user count is retirved and stored into the databse from here onwards.

Below is how it is done.

I added a button to UI to click to enable login indicator. When user clicks this button it starts the LoggedInUsersCountCollectorThread with the session as below.

After that i can use the current session and get logged in users from time to time. This is similar to how the OpenMRS Core --> Administration --> Maintenance --> View logged in users section is also getting the users list.

Below is the chart view of the stored data which is calculated every 30 seconds.

Here are the commits i made for the feature within this week.
Since there is a new JIRA project is created for our project now i created the first feature entry there.
Posted by Unknown at 9:07 PM No comments:

This week i started with application indicators and as discussed previously with Pascal and Jan my first indicator to work on is Logged-in users count. Therefore i tried to record data on Logged In users.


However currently i have blocked a bit in that in by this week.


I first created the relevant table structure, DAO objects etc. for LoginValue DAO where we can store [timestamp, metric_id, logged in user count] records. Then in order to retrieve data on user log-ins i created a collector thread and implemented it with HTTPSessionListener class. So when the system starts the login data collector thread would run in each 30 seconds and create LoginValue entry and add it into data table. Then we can retrieve data from this table and draw the graph.


My intention was that when a user logs in, the sessionCreated() event will be triggered in this LoggedInUsersCountCollectorThread collector class which is given below.


However this listener doesn't trigger when i started the module. My other functions works as expected and it updates the table etc. however since this thread always returns currentUsers list size as zero ( as sessionCreated event never triggered), the count is always recorded as 0 so i am unable to proceed to draw tables. I also tried with adding a listener entry into override-web.xml file in OpenMRS/test/resource directory as this but no luck.


I will be discussing this with Pascal on the weekly update call this Monday and will get his advice. Based on that i hope i can correct if there is any issue or else i will be moving to try an alternative way.
Posted by Unknown at 2:00 PM No comments:

This week i released the first public available version of System Performance and Utilization Module. The  'systemmetrics-1.0.omod' is now available in the OpenMRS module repository and i created the corresponding Git tags v1.0.0 as well as the module documentation.

Below i would like to mention the useful references that helped me in releasing a module against github.

Once you follow the given instructions github will be automatically having the release tag in the git hub repo as below.

However i still need to deploy the module artifacts into remote nexus repository as i currently don't have access for it. I have submitted an access request and awaiting response on it.

There are few tasks for me to getting done with the 1.0.0 version. First one is deploying the artifacts into nexus. then create a JIRA project and also upload a video on using the module. While working on these things getting done, i hope to move into Application Indicators Implementation from next week too.
Posted by Unknown at 12:07 AM No comments:

I was able to work on towards this and complete the memory data during this week and covered the tasks below.

2. Added the next graph on per minute memory values for the Used Memory.

3. Added schedulers to delete the data from per second and per minute data tables in the database periodically. The current time duration is per second data will be deleted in every 30 minutes and per minute data will be cleared in every 5 hours to avoid these tables getting flooded. Evetually these values will be make configurable using global properties so users have the freedom of configuring those as they need.

4. Modified the Module home page and provided links to view the charts and tables. 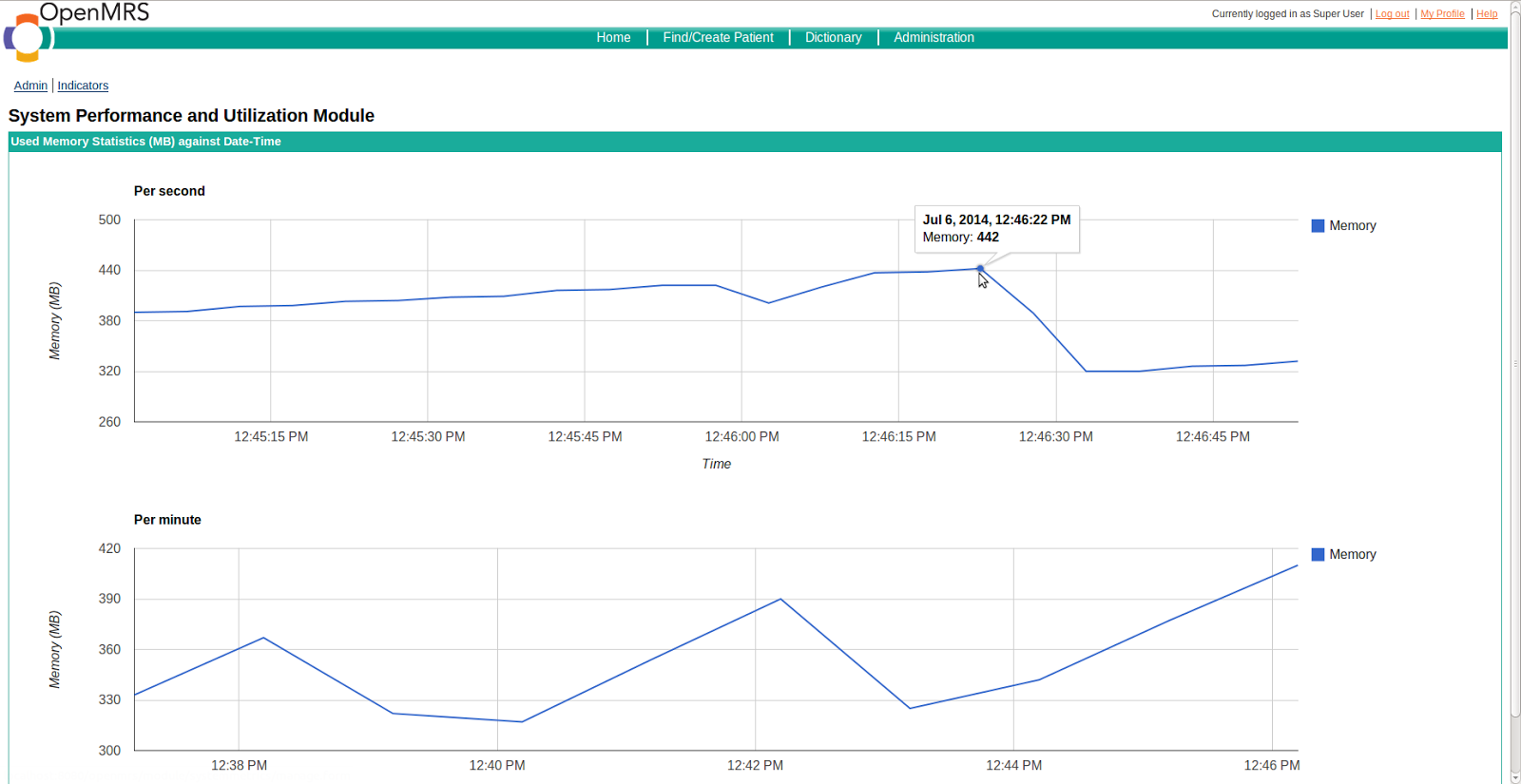 For the next week i hope to finish the documentation so far, create the JIRA project and create the first video of the System Performance and Utilization Module and release 1.0.0 version of the module.

Once we get the release out the next task would be start on Application indicators and get the data on logged in users statistics and display it in the module.